To participate in the #1941book sign-up page hosted by Rich Westwood at Past Offences I’ve pre-order Ten Star Clues (Bobby Owen Mystery # 15) by E.R. Punshon. It was first published in 1941 and, if my information is corrects, was out of print.  The Kindle edition by Dean Street Press will go on sale on 7 December. 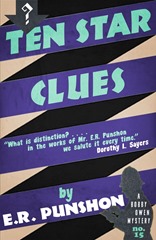 “Murder,” Bobby answered as he made for the door.

Bobby Owen has left London and is now a policeman in the bucolic county of Wychshire. The local community is stunned when a missing heir returns to Castle Wych, determined to claim his inheritance. But following the ensuing dispute over his identity, Castle Wych plays host to murder. There are ten “star clues” investigated by the resourceful Bobby, with help from his wife Olive, in this delightful and classic example of the golden age mystery novel.

E.R. Punshon (Ernest Robertson Punshon) was born in London in 1872. At the age of fourteen he started life in an office. His employers soon informed him that he would never make a really satisfactory clerk, and he, agreeing, spent the next few years wandering about Canada and the United States, endeavouring without great success to earn a living in any occupation that offered. Returning home by way of working a passage on a cattle boat, he began to write. He contributed to many magazines and periodicals, wrote plays, and published nearly fifty novels, among which his detective stories proved the most popular and enduring. He died in 1956. (Source: Amazon)

Read more at The Passing Tramp