Summary: The Poisoned Chocolates Case (1929) is a detective novel by Anthony Berkeley set in 1920s London in which a group of armchair detectives, who have founded the “Crimes Circle”, formulate theories on a recent murder case Scotland Yard has been unable to solve. Each of the six members, including their president, Berkeley’s amateur sleuth Roger Sheringham, arrives at an altogether different solution as to the motive and the identity of the perpetrator, and also applies different methods of detection (basically deductive or inductive or a combination of both). Completely devoid of brutality but containing a lot of subtle, tongue-in-cheek humour instead, The Poisoned Chocolates Case is one of the classic whodunnits of the so-called Golden Age of detective fiction. As at least six plausible explanations of what really happened are put forward one after the other, the reader—just like the members of the Crimes Circle themselves—is kept guessing right up to the final pages of the book. (Source: Wikipedia)

The genesis of the plot can be found in a clever short story, “The Avenging Chance”, in which Roger solves the murder of Joan Beresford. Berkely expanded the story, making changes in the process, above all by ng Roger’s solution shown to be mistaken. In an odd twist somehow typical of Berkeley’s contrariness, the novel appears to have been published before the short story, perhaps he realised that he had come up with a superb concept, and felt it made commercial sense for the novel to appear first. [Martin Edwards’ The Story of Classic Crime in 100 books (British Library Publishing, 2018)].

My Take: I’m re-visiting The Poisoned Chocolates Case by Anthony Berkeley, mainly because I quite forgot the denouement of the original story and because I also was interested in reading Martin Edwards’ Introduction and Epilogue together with the new solutions proposed by both, Christianna Brand and Martin Edwards himself. It was funny to find out how the whole story came back to me while I was re-reading it, and I must confess that I have started to appreciate it much more after a second read.

The story can be summarised as follows: Sir Eustace Pennefather, a notorious womanizer, receives a box of chocolates while staying at his London club. He disapproves such modern marketing techniques and is about to throw it away. But Graham Bendix, another club member whom he hardly knows, has lost a bet with his wife and needs one. Bendix accepts the box, takes it home and gives it to his wife. Both try them together after lunch. His wife takes seven and he takes two. A few hours later Joan Bendix is dead, poisoned by nitrobenzene, while he is left seriously ill. It becomes clear that the intended victim was Sir Eustace Pennefather rather than the innocent Joan Bendix, but Scotland Yard, unable to solve the case, accept the rather unusual suggestion made by Roger Sheringham. They never would have encouraged it, but finally they let him try it, albeit with certain reluctance, since they did not find anything wrong in it. Roger Sheringham’s suggestion was that his Club, the Crimes Circle, should take up the investigation of the case where the authorities, had left it.

The so-called Crimes Circle, a private club run by Roger Sheringham himself, is made up by six members among which we can find ‘… a famous lawyer, a scarcely less famous woman dramatist, a brilliant novelist who ought to have been more famous than she was, the most intelligent (if not the most amiable) of living detective-story writers, Roger Sheringham himself and Mr Ambrose Chitterwick, who was not famous at all, a mild little man of no particular appearance who had been even more surprised at being admitted to this company of personages than they had been at finding him amongst them.’  A club that can be rightly considered a fictional predecessor of the Detection Club, formed in 1930 by a group of British mystery writers, including Agatha Christie, Dorothy L. Sayers, Ronald Knox, Freeman Wills Crofts, Arthur Morrison, Hugh Walpole, John Rhode, Jessie Rickard, Baroness Emma Orczy, R. Austin Freeman, G. D. H. Cole, Margaret Cole, E. C. Bentley, Henry Wade, and H. C. Bailey. And in which Anthony Berkeley himself was instrumental in its setting up.

The object of such experiment will be that every club member, working independently, and using whatever method of investigation  each would deemed most appropiate, deductive, inductive or a mixture of both, could come up with a reasoned explanation to the case. For such purpose they will dispose of one week for formulating their own theories and carrying out any investigation they consider necessary. After which  the members will meet again on six consecutive evenings and each one of them will read their papers and present their own conclusions in the order that luck decides next.

Each solution will be credible, but the problem is that each one points to a different murderer and the reader will be kept puzzled up to the final pages.

I can simply say that The Poisoned Chocolates Case not only established a new milestone in the history of detective fiction, but still is a brilliant novel which is well worth reading. As point out in some reviews, detection is not an exact science and allows different alternatives. The number of possible solutions, if we think about it carefully, enable various interpretations. The two additional endings are a good evidence of this, even though the quality of the new solution proposed by Martin Edwards is far superior, in my view, to the one by Christianna Brand. It turned out interesting to verify how the shape in which the facts are presented by the authors may condition the conclusions at which they arrive. In a nutshell, a superb story that is fun to read and that I highly recommended.

The Poisoned Chocolates Case is included in Martin Edwards’ The Story of Classic Crime in 100 books (British Library Publishing, 2018).

The Poisoned Chocolates Case has been reviewed, among others, at Golden Age of Detection Wiki, A Penguin a week, The Green Capsule, Cross-Examining Crime, The Invisible Event, Vintage Pop Fictions, The Reader is Warned, Bedford Bookshelf, In Search of the Classic Mystery Novel, Mystery File, Classic Mysteries, Clothes in Books, ‘Do You Write Under Your Own Name?’, Past Offences, Noah’s Archives and At the Villa Rose.

About the Author: Anthony Berkeley was born Anthony Berkeley Cox in 1893. A journalist as well as a novelist, he was a founding member of the Detection Club and one of crime fiction’s greatest innovators. Writing at a time when the main form of the detective story was that of a puzzle – with emphasis on plot rather than on character – he was one of the first to foresee the development of the ‘psychological’ crime novel and to successfully carry out his predictions, writing under the pseudonym of Francis Iles. In Malice Aforethought (1931) there is no problem in the conventional sense as the intended plans of the murderer are declared at the beginning of the action. The interest lies in whether these plans will be successfully carried out and in the interplay between the characters in the book. Two more novels were written under his pseudonym. Before the Fact (1932), where again there is no puzzle of the classical kind, and As for the Woman (1939), which was to be the first part of an intended trilogy which he never finished. Other novels written as Anthony Berkeley, include The Wychford Poisoning Case, 1926; The Silk Stocking Murders, 1928; The Piccadilly Murders, 1929; The Second Shot, 1930; Murder in the Basement, 1932; Jumping Jenny, 1933; Panic Party, 1934, Trial and Error, 1937; Not to Be Taken, 1938; Death in the House, 1939 and, probably the best known The Poisoned Chocolates Case, 1929. Altogether he wrote twenty-four novels, ten of which feature his amateur detective, Roger Sheringham. Anthony Berkeley died in 1971. (Source: Penguin Classic Crime)

Ranking the Work of Anthony Berkeley at Cross-Examining Crime. 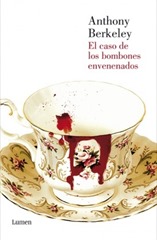