Herbert J. Brean (10 December 1907 – 7 May 1973) was an American journalist, mystery‐story writer and editor, best known for his recurring series characters William Deacon and Reynold Frame. Among his books were seven mysteries, Wilders Walk Away (Reynold Frame #1), 1948; The Darker the Night (Reynold Frame #2), 1949; Hardly a Man Is Now Alive (Reynold Frame #3), 1950 aka Murder Now and Then; The Clock Strikes 13 (Reynold Frame #4), 1952; Dead Sure (1957) aka A Matter of Fact (US) / A Collar for the Killer (UK); The Traces of Brillhart (William Deacon Mystery #1), 1960; and The Traces of Merrilee (William Deacon Mystery #2), 1966. Herbert Brean was also editor of The Mystery Writer’s Handbook (1956), The Life Treasury of American Folklore (1961), and The Music of Life (1962), which drew on a lifelong love of jazz. He was a director and former executive vice president of the Mystery Writers of America, a group for which he also taught a class in mystery writing. Aside from his seven mystery crime novels, he also published non-fiction books and articles, and mystery magazine short stories. Alfred Hitchcock used “A Case of Identity” (1953), one of Brean’s many articles for Life, as the basis for Hitchcock’s film The Wrong Man (1957). As a lifelong Sherlock Holmes fan, Brean was a member of The Baker Street Irregulars, and as such he wrote the introduction to at least one Holmes edition. In nonfiction, he wrote How to Stop Smoking (1951), which was widely acclaimed and translated; How to Stop Drinking (1958) and The Only Diet That Works (1963).

With few exceptions (Dead Sure, The Traces of Brillhart, and The Traces of Merrilee), the rest of his mysteries are difficult to find.

Some of Herbert Brean novels have been reviewed at The Green Capsule, The Invisible Event, Beneath the Stains of Time, Mystery File, The Passing Tramp, In Search of the Classic Mystery Novel

This author only wrote a handful of books, but all seven are worth your time. Wilders Walk Away is a spooky tale about the Wilder family, who has this funny habit of walking out of the house never to be seen again. Supernatural shenanigans not far off the approach of John Dickson Carr, where everything is resolved un-supernaturally at the end. Really classic American detective fiction, well-written and smart, and frequently with a strong flavour of what I’ll call “Americana”; Brean takes the flavour of the English village mystery and transplants it to the US very successfully. The Traces of Brillhart is an interesting mystery that used to make my life hell; a paperback publisher had mistakenly attributed it to Carr in the back pages of the book and every so often someone would come in and insist that this was the last Carr on their list to track down and read. I hate disappointing a Carr fan! (Noah Stewart) 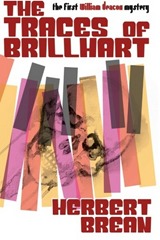 Description: Brill Brillhart, the songwriter, was known as the biggest heel to hit New York in four decades. So the report of his murder was no disappointment. But it was disconcerting when gossip columnists daily recorded his activities: escorting beautiful women to Manhattan’s most glamorous nightclubs, writing songs, and otherwise behaving as a person very much alive. Crack magazine writer William Deacon set out to unravel the mystery and quickly discovered that he, Deacon, had his own problems about staying alive.

The Traces of Brillhart review by Jim Noy at The Invisible Event.