HarperCollins TV tie-in edition, 2010. Format: Kindle Edition. File Size: 1125 KB. Print Length: 228 pages. ASIN: B0046A9MUY. eISBN: 9780007422241. First published in the UK by the Collins Crime Club in September 1975 and in the US by Dodd, Mead and Company later in the same year. The novel features Hercule Poirot and Arthur Hastings in their final appearances in Christie’s works. It is a country house novel, with all the characters and the murder set in one house. Not only does the novel return the characters to the setting of her first, The Mysterious Affair at Styles, but it reunites Poirot and Hastings, who last appeared together in Dumb Witness in 1937. Christie wrote the novel in the early 1940s, during World War II. Partly fearing for her own survival, and wanting to have a fitting end to Poirot’s series of novels, Christie had the novel locked away in a bank vault for over thirty years. The final Poirot novel that Christie wrote, Elephants Can Remember, was published in 1972, followed by Christie’s last novel, Postern of Fate. Christie authorised Curtain’s removal from the vault and subsequent publication. It was the last of her books to be published during her lifetime. Sleeping Murder [1976], published posthumously, is her final novel. 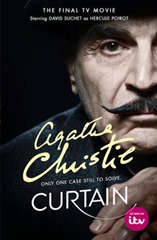 First sentence: Who is there who has not felt a sudden startled pang at reliving an old experience, or feeling an old emotion?

Synopsis: A wheelchair-bound Poirot returns to Styles, the venue of his first investigation, where he knows another murder is going to take place… The house guests at Styles seemed perfectly pleasant to Captain Hastings; there was his own daughter Judith, an inoffensive ornithologist called Norton, dashing Mr Allerton, brittle Miss Cole, Doctor Franklin and his fragile wife Barbara, Nurse Craven, Colonel Luttrell and his charming wife, Daisy, and the charismatic Boyd-Carrington. So Hastings was shocked to learn from Hercule Poirot’s declaration that one of them was a five-times murderer. True, the ageing detective was crippled with arthritis, but had his deductive instincts finally deserted him?…

More about this story: Arthritic and immobilized, Poirot calls on his old friend Captain Hastings to join him at Styles to be the eyes and ears that will feed observations to Poirot’s still razor sharp mind. Though aware of the criminal’s identity, Poirot will not reveal it to the frustrated Hastings, and dubs the nameless personage ‘X’. Already responsible for several murders, X, Poirot warns, is ready to strike again, and the partners must work swiftly to prevent imminent murder.Poirot’s final case, a mystery which brings him and Hastings back to Styles where they first solved a crime together. The story was both anticipated and dreaded by Agatha Christie fans worldwide, many of whom still refuse to read it, as it is known to contain Poirot’s death. Agatha Christie wrote it during World War II, as a gift for her daughter should she not survive the bombings, and it was kept in a safe for over thirty years. It was agreed among the family that Curtain would be published finally in 1975 by Collins, her long-standing publishers, and that Sleeping Murder (the Marple story written during the war for her husband, Max) would follow. The reception of Poirot’s death was international, even earning him an obituary in The New York Times; he is still the only fictional character to have received such an honour. The first actor to take on the role of portraying Poirot in his final hours was David Suchet, as the final episode of the series Agatha Christie’s Poirot for which he’d been playing the role for twenty-five years. The episode was adapted in 2013.

My Take: With Curtain I conclude my challenge to read all the books in Poirot series, more or less in order of publication. A couple of exceptions I still have missing, Hercule Poirot and the Greenshore Folly [2014] and Black Coffee [1998], although Black Coffee, adapted from Agatha Christie’s play of the same title and novelised by Charles Osborne, was published in 1998. And Hercule Poirot and the Greenshore Folly, although written by Agatha Christie herself in 1954, was ultimately never published in its original form and, instead, it became the basis for one of her favourite novels, Dead Man’s Folly [1956]. I might read them later on, but I don’t feel myself obliged to read them right now.

Back to Curtain, the story is told by Captain Hastings, who had appeared last at Dumb Witness [1937]. I won’t extend myself recalling that some thirty odd years passed from when it was written until it was published. The story begins when Captain Hastings receives a letter from his friend Hercule Poirot urging him to meet at Styles. Sadly enough Hastings finds Poirot confined to a wheelchair. The reason for Poirot to call him was to help him unmask a ruthless murderer who has already killed five people, without being identified. The most strange thing about this case is that Poirot has perfectly identified the culprit, but he refuses to share this information with Hastings for fear of him to make a wrong move. Besides Poirot is absolutely certain that the murderer is planning to strike again. Will be able Poirot, with the help of Hastings, prevent a new murder and warn the victim?

Although Curtain has not received a favourable unanimous review, I’m bound to say that it is an excellent novel worthy, by its own right, to take up a place among the best Poirot novels, despite its sombre tone. Its theme revolves around the possibility that anyone can turn out being a murderer given the adequate circumstances. A golden brooch to a magnificent series. As Martin Edwards correctly point out here “I think the culprit’s modus operandi is absolutely fascinating, while the locked room scenario and the final startling revelation are classic devices.” At the end of the Kindle version there is an interesting essay by Sir Charles Osborne in which he discusses the decision taken to finally publish the novel, and the impact that it had on the Christie reading public.

About the Author: Agatha Christie, in full Dame Agatha Mary Clarissa Christie, née Miller, (born September 15, 1890, Torquay, Devon, England—died January 12, 1976, Wallingford, Oxfordshire), English detective novelist and playwright whose books have sold more than 100 million copies and have been translated into some 100 languages. Educated at home by her mother, Christie began writing detective fiction while working as a nurse during World War I. Her first novel, The Mysterious Affair at Styles (1920), introduced Hercule Poirot, her eccentric and egotistic Belgian detective; Poirot reappeared in about 25 novels and many short stories before returning to Styles, where, in Curtain (1975), he died. The elderly spinster Miss Jane Marple, her other principal detective figure, first appeared in Murder at the Vicarage (1930). Christie’s first major recognition came with The Murder of Roger Ackroyd (1926), which was followed by some 75 novels that usually made best-seller lists and were serialized in popular magazines in England and the United States.Christie’s plays include The Mousetrap (1952), which set a world record for the longest continuous run at one theatre (8,862 performances—more than 21 years—at the Ambassadors Theatre, London) and then moved to another theatre, and Witness for the Prosecution (1953), which, like many of her works, was adapted into a successful film (1957). Other notable film adaptations include Murder on the Orient Express (1933; film 1974 and 2017) and Death on the Nile (1937; film 1978). Her works were also adapted for television. In 1926 Christie’s mother died, and her husband, Colonel Archibald Christie, requested a divorce. In a move she never fully explained, Christie disappeared and, after several highly publicized days, was discovered registered in a hotel under the name of the woman her husband wished to marry. In 1930 Christie married the archaeologist Sir Max Mallowan; thereafter she spent several months each year on expeditions in Iraq and Syria with him. She also wrote romantic nondetective novels, such as Absent in the Spring (1944), under the pseudonym Mary Westmacott. Her Autobiography (1977) appeared posthumously. She was created a Dame of the British Empire in 1971. (Source: Britannica)

Curtain: Poirot’s Last Case has been reviewed, among others, at Books Please, Clothes in Books, ‘Do You Write Under Your Own Name?’, ahsweetmysteryblog, Mysteries in Paradise,