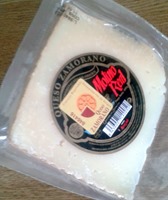 Another favourite cheese of mine is Queso Zamorano, a sheep’s milk cheese made in the province of Zamora, Spain. This is a hard cheese which is typically aged about 6 months. The cheeses are turned often and rubbed with olive oil, giving the cheese its characteristic dark colour. This cheese owes its flavour character to the breed of sheep, the “small, scruffy” Churra and the Castellana sheep, predominant in the region, to the cold and humid climate conditions, and to its long aging in cellars. Zamorano has a “very creamy, sweet, savoury flavour,” with “a hint of piquancy.” Others describe it as hardy and nutty. The shape is cylindrical with “a distinctive zigzag pattern,” similar to Castellano or Manchego, which it resembles in taste also. The size is approximately 11 kg (24 lb). Zamorano cheese is protected by its Denominación de Origen, which specifies its production, ingredients, and maturation. (Source: Wikipedia)